PONT contributes to long-term conservation objectives by co-financing key conservation actions and providing funding continuity for its grantees. We collaborate with stakeholders and environmental actors to improve the quality and efficiency of management and use the provided co-funding to reach the optimal impact on biodiversity conservation.

Estimating the abundance of brown bears in the wild is a daunting task. It’s virtually impossible to directly observe the bears and estimate how abundant they are. Tagging them with individual-specific tags is a highly demanding task and unfeasible in any real-life setting, as is the reading of any such tags. For these reasons, the abundance estimates of brown bear populations are often based on expert opinions and rarely backed by strong evidence from the field.

Previous efforts to estimate the size of the population in Prespa used questionnaire surveys to “guesstimate” the number of brown bears in the wider Prespa region. The latest survey estimated the total number to be around 60, with 35 of those in the Macedonian part of Prespa, 18 in Greek Prespa, and 7 in Albanian Prespa.

The validity of these so-called “guesstimates” is often challenged though. Fortunately, molecular genetics has recently opened up new possibilities to “tag” individual bears through genotypes obtained from genetic material that they leave behind in the environment (e.g.: faeces or hair).

This led the PrespaNet NGO network to conduct a two-year transboundary study in Prespa using novel genetic techniques to estimate the abundance of brown bears in the region. This was achieved through the project “Strengthening NGO-led Conservation in the Transboundary Prespa Basin” which was supported by PONT and the Aage V. Jensen Charity Foundation. Read More.

In 2007 a team from the Macedonian Ecological Society (MES), in cooperation with Serbian and French scientists (herpetologists and ecologists) commenced the long-term study of the population dynamics of the Golem Grad island reptiles.

Working with free-ranging long-living animals can be painstaking and data collection is always long, but it remains the most effective way of uncovering species’ life histories and identifying what makes them most vulnerable to a changing environment. Fortunately, closed systems like Golem Grad facilitate such data collection, which may well be impossible in open systems, particularly for elusive species.

The densest dataset comes from Hermann’s tortoises with 1,854 marked individuals and an astonishing 15,995 recaptures thus far!

More than 6,000 dice snakes have been marked, but unfortunately there have been very few recaptures due to their drastically declining population since 2010 – due to a decrease in police patrols, that in turn also marks a boost in fishing pressure (and by extension, fishing nets in which fish-hungry snakes drown by the dozens).

The horn-nosed viper is the most elusive of the three studied species and a vicious predator, yet it also boasts very dense populations for a species so high on the food chain; 537 individuals have been marked with 264 recaptures. Read More

Implemented over a period of 18 months and financed by PONT and CEPF the project “Site Restricted Endemics of Prespa National Park -Assessment, protection and in-situ/ex-situ conservation, through involvement of young professionals” assessed the conservation status of 10 restricted endemics of Prespa area.

Two taxa were newly identified as part of the research on Albanian flora:

These plants have been recorded in the Ivani Mountain and along the path between the villages of Cerje and Rakicka in Prespa National Park. Read More. 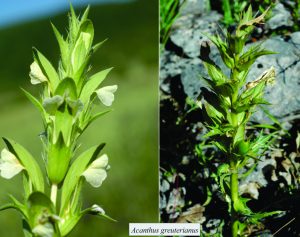 Prespa’s wetland habitats – providing a place for nature to thrive!

Working in Prespa, PONT and the PrespaNet partners have always understood that transboundary collaboration is an essential prerequisite to successfully protecting biodiversity. The three NGOs – the SPP, MES and PPNEA – together with EuroNatur, are currently working on their second three-year project, supported by PONT and the Aage V. Jensen Charity Foundation, with cross-border co-operation to the fore.

One of the highlights of the NGOs’ work over the last three years has been the effort to map and assess the conservation degree of wetland habitats around the basin. This activity grew to encompass all three countries that share the lakes, after its relatively humble beginnings as a stand-alone activity in North Macedonia, led by MES with support from the SPP. Working together, the partners built capacity, extending the activity to Albania a year later and laying the groundwork for wetland habitat restoration activities, all with the dedicated and inestimable support of renowned phyto-sociologist Prof. Giorgos Fotiadis from the Agricultural University of Athens. Throughout the mapping and assessment process, the Natura 2000 methodology was applied, transferring knowledge, experience and expertise from the Greek part of Prespa to the other two sides of the lakes basin. Read More. 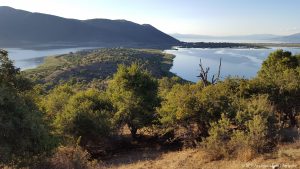 A breakthrough in conserving forest biodiversity in Galicica National Park!

The rich and important forest biodiversity of the Galicica Mountain was the principal reason for declaring it a National Park, back in 1958. Restoration of degraded forest habitats was therefore of highest priority for the park managers in the first three decades after the proclamation. Active forest management was carried out in line with regular 10-year forestry management plans that were mandatory for all forestry operations in the country. The firewood produced in the process generated revenues that covered the operational costs of the park administration that started off with limited human resources and physical infrastructure. As the park administration and its operational costs grew over the next few decades, and being financed exclusively from self-generated income, economic goals often trumped nature conservation objectives, hampering the further progress in restoring the forests to a more natural condition.

With the income generated from firewood production as the predominant source of financing, the progress on achieving the management goals was modest and could not be sustained in the long-term, however. While the volume of wood extracted was gradually declining from 2015, the contribution of revenues from other sources increased moderately, as can be seen in the graph above. It was only after the financial support from PONT that the park management could decouple the financing of its key operations from the direct use of forest resources. This was achieved in 2020 when only a small amount of firewood was provided to vulnerable people from among the local communities. Read More. 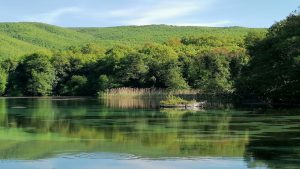